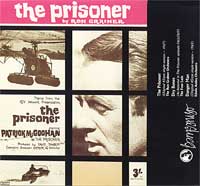 Do you have memories or pictures you would like to share? If you do, please do not hesitate to This email address is being protected from spambots. You need JavaScript enabled to view it.

If you have any questions regarding Ron Grainer and his career, please use The Ron Grainer Appreciation Society Facebook page.

I was once invited to dinner at Ron Grainer's in London and had the most fantastic vegetarian meal I've ever had. Ron was a vegetarian and a great host.

Mr. Phillip Sear informs us that he has uploaded a Video of his performances of three pieces from the 'Meet Ron Grainer at the Piano' book on YouTube channel

I am delighted to find your excellent site about Ron. I am a former Sound Supervisor from BBC tv in London and I worked with Ron often in the early 60s on Maigret, Comedy Playhouse, Dr Who, That was the Week..., Not so much a programme... and even the odd Fanny Craddock, and then much later I occasionally worked on Paul Temple.

Ron was a delight to work with. I worked with many excellent composers at the BBC but Ron was outstanding in a number of ways. Many composers are able to work quickly and accurately and Ron could certainly do that. (In the film business they are inclined to say "Don't make it good, make it Friday".) Ron could make it good and still make it by Friday! But what really set him apart was that he could achieve a new and interesting sound with a comparatively small orchestra. This was largely due to his collection of odd instruments and his ingenious orchestration. This was important because television drama has always been rather expensive to produce and often there was not much money left for the music after paying for all the artists etc, but Ron could always produce an interesting sound.

My most vivid memories are from the Maigret days. My job at that time was to record the music, edit the tapes and play the music in live as the actors performed. A difficulty with this was that as the actors developmed their performance during rehearsals they would change the speed of the action, so that a piece of carefully crafted music became either too short or too long. This meant that I was busy adjusting lengths all day right up the the 'live recording' in the evening.

Ron understood this very well and was able to write music which was eminently cuttable and still sounded right at the end.

In the music recording studio, he was super efficient. He would call the ident by cue number, page number, duration, what the cue line was and where the music was meant to end. He would then start conducting.

Some of those cues had to synch to pieces of film but we never ran the film in the sound recording studio, and with the aid of only a stop watch he would check the duration as he went and also check any 'synch points' where the music had to change to match the action. Occasionally you would hear him say something like "No we have to do that again. We were two fifths of a second late on the second synch point". Most things were OK in one or two takes though.

I remember Ron's departure for Portugal. He told me that he could have moved to Cornwall for the light but he could get back to London from Portugal just as quickly. I did sense though that Portugal had a rather stronger pull!

Years later I met Ron by chance in a BBC studio after his return. He had changed so much in appearance that I didn't recognise him at first, but his voice was unmistakeable. Sadly I never worked with Ron again but I have some very happy memories of recording sessions with him and also an LP of the Maigret music which he signed and gave to me.