We regret to announce the death of Basil Poledouris, fine composer and friend of John Barry.

But here we have a few series of photos taken at the John Barry / Ten Tenors concert. Are yours distinctly different? This email address is being protected from spambots. You need JavaScript enabled to view it.

There is exciting breaking news that a record company is working on two John Barry projects for release later this year.

One is intended to be a "Best of" compilation which will be TV-advertised. The other is a very ambitious "definitive" box-set which will contain the highlights of his entire career.

We're told that wherever possible original versions will be used but in some cases that may prove impossible due to missing tapes and licensing problems.

More details will follow as soon as track details can be confirmed.

Latest news, October 9 - the box-set has now been delayed until 2007. This is due entirely to licensing delays and difficulties. The good news is that it has only been postponed, not cancelled.

GQ Man of The Year

Just to confirm that the John Barry GQ award was as one of their Men Of The Year. "Inspiration Award".

There is a four page article on the composer in GQ magazine, including pics and album covers.

"The Living Daylights" is screening at the Empire cinema in Leicester Square, London, every day from 1 - 7 September. 10.40am (that's A.M.!).

An evening with John Barry featuring The Ten Tenors 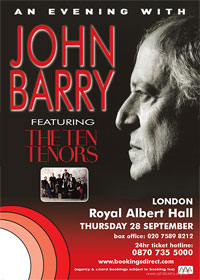 An evening with John Barry featuring The Ten Tenors

To coincide with the upcoming release of their Warner Bros. Records debut album 'Here's To The Heroes', Australian sensations The Ten Tenors will play the Royal Albert Hall on September 28th at An Evening With John Barry.

Legendary composer John Barry, who was executive producer on the album, will introduce the show and will perform as a special guest conductor of selected material.

The Ten Tenors will perform alongside The English Chamber Orchestra.

Paul Bateman will be the principle conductor.

Recorded at Abbey Road and produced by Simon Franglen (Russell Watson, Katherine Jenkins), 'Here's To The Heroes' finds The Ten Tenors backing by a 90-piece orchestra and some of the world's leading musicians paying tribute to the compositional film score icon John Barry and his lyricist partner Don Black.

"The Tenors are a great instrument, a unique group," commented Barry.

"They are also so diverse with wonderful individual voices as well as a collective sound. Writing for them was a joy because their belief was so constant. A many headed group that pulls together? Doesn't happen often. Having worked with bands and orchestras over the years I know that's a rare commodity."

Having formed in 1995, The Ten Tenors soon established themselves care of a hectic touring schedule in their homeland of Australia.

They gained an international audience following a phenomenal special guest appearance at 2002's Eurovision and their crossover sound earned a dedicated following for their live performances the world over.

'Here's To The Heroes' represents their first global album release.

The Album: Here's to the Heroes 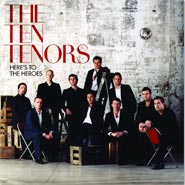 The full track listing is:

1 JUST TO SEE EACH OTHER AGAIN*
2 LES CHORISTES
3 HERE'S TO THE HEROES (Dances with Wolves)
4 WE HAVE ALL THE TIME IN THE WORLD (OHMSS)
5 BUONGIORNO PRINCIPESSA
6 THERE'LL COME A DAY*
7 PLACES (Out of Africa)
8 YOU ONLY LIVE TWICE
9 TICK ALL THE DAYS OFF ONE BY ONE*
10 WHO WANTS TO LIVE FOREVER?
11 SOMEWHERE IN TIME
12 THE GLADIATOR SUITE (NOW WE ARE FREE & IL GLADIATORE)

Please, click here for a sneak preview of the songs and to watch videos relating to the album.

Mr. Dave Norris, Senior Projectionist at the Empire, Leicester Square, kindly informs us: Thunderball is back on at the Empire with eon's own new print, its mono but looks stunning on our new BIG screen!

We are showing SPY, DAYLIGHTS, GOLDENEYE in the coming wks also. See you there!

Two simultaneous John Barry-scored matinees this Sunday (6th August) with "Out Of Africa" at the Curzon Mayfair and "Zulu" at the Curzon Soho, London, both at 1pm.

And yes, we have reported that the photo is of Ennio Morricone. Sigh.

We are pleased to say that John's wife has confirmed the concert goes ahead and John will be conducting. We don't know precisely *what* he will be conducting, but it looks as though it is certainly well worth attending!!

Bryan and John collaborated on six films and developed a mutual admiration for each other's work.

Bafflingly, neither gentleman has yet received a deserved knighthood.

We are very sorry to announce the death of legendary trombonist Don Lusher. In a career spanning more than 60 years, Don was a member of several famous bands, including Ted Heath, The Squadronaires, Jack Parnell and Geraldo.

In addition to this, he played on many recording sessions, including some by John Barry. In 1975 he was a member of the John Barry Orchestra that toured Japan under the management of Sid Margo. He willingly lent us his photo tour memento of this orchestra, which will be reproduced in our updated book.

We at johnbarry.org.uk want to give you, the John Barry fans, the opportunity to share your spare CDs, vinyl, cassettes and maybe even DVDs with each other.

Don't worry, we are not advocating a great give-away! No, we are giving you the chance to buy or sell John Barry material at a reasonable price without the hassle of an eBay style auction.

So, anything and everything offered will be at a predetermined set price, and, in the event of a "one of a kind", will be sold on a first come first served basis.

Want to learn more? Go to our for sale / wanted page for all the details. You'll find a few items already up for sale. Don't hesitate to add your own, whether buying or selling!!

Barry and Black songs to be recorded by The Ten Tenors

Don Black has confirmed the news that he and John have written a number of songs which will be recorded by The Ten Tenors, an Australian ensemble.

The recording will begin on the 20th March as the Tenors take a break in the midst of their US tour.

Don said there would be both new songs and old ones written by the duo.

Apparently recording will be split between Air and Abbey Road Studios - both based in London. This is a tactic John Barry has employed previously.

The Ipcress File showing at the NFT in London, starting Jan. 13 until Jan 26.

"I had a good laugh over the comments on Dan Wallin's master of "BH". Who posts this nonsense on the internet? They should get their facts "straight" beforehand.

The "few year's ago" was over 20-years ago, when Dan Wallin, in fact, DID prepare a master tape under Barry's supervision. But, when he wanted way too much money from me for the transfers, I said to him, "thanks, but no thanks!". I then remixed the multi-tracks myself without Barry at hand, and released the Label X LP (and, later on, the CDs) from that. Barry objected most strongly to my mix, and refused to have anything further to do with the album. He has not spoken to me from that day forward.

Some years later I received a call from Keith Zajeck at Warner Bros. He asked me if I knew where the multi-tracks were, as they wanted to re-mix them for their DVD release. I informed him that they had long since been returned to the vaults at The Burbank Studios. Unfortunately, Warners could not find them (surprised?!).

I then suggested to Keith that he contact Dan Wallin, who would most surely have the stereo LP master which he originally prepared for me. Again, Wallin could not find the 2-track stereo master tapes.

So, you have the "true story" of "Body Heat" and the missing masters. "

Lukas Kendal at FSM reports that stocks of Monte Walsh (and certain other items) are low. So if you don't already have this excellent CD, this might be your last opportunity to get it at a reasonable price.

See his announcement at Filmscoremonthly

As many of you know, John Barry’s entry into the film music world came courtesy of his relationship with the fledgling pop singer, Adam Faith. It could also be that there are some fans of Adam out there, especially amongst the older ones of us!! In which case you might be interested in a visit to the new web-site currently being created by Barry web-master Ruud Rozemeyer from input by myself and Gareth “hoarder” Bramley.

If I do say it myself I believe this has the potential to be an excellent site. It’s looking rather good already, in fact, so why not have a glance or two at

and let us know what you think.