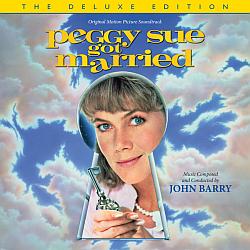 Varese Sarabande have released an expanded Peggy Sue Got Married: The Deluxe Edition.

The Betsy re-recording on CD

The World Premiere Recording of the Complete Score to THE BETSY 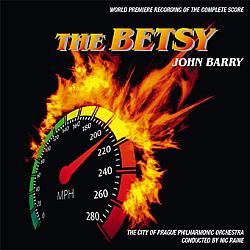 After recording Mister Moses, an early score from John Barry, in the same series of sessions we tackled a more mature offering from the composer, The Betsy. This is very much Barry in his more subdued and romantic mode … although there are a few touches of his “Bond” style in the more violent passages. Romance is certainly to the fore in his beautiful main theme – a waltz which, in its many variations and repetitions, displays Barry’s elegance, sophistication and assured dramatic instinct. But it is the subtle scoring of scenes of incest and sexual intent that shows the composer at his most sensitive – especially the tortured solos for violin and cello, played here with so much feeling by Lucie Svehlova and Marek Elznic. After the rhythmic intensity of the earlier score it was quite a leap for the musicians to be expressive while also displaying the great restraint the music demanded.

World Premiere Recording of the Complete Score to MISTER MOSES 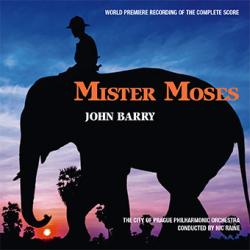 Added Septenber 21, 2014
James FitzPatrick has produced a new recording on CD of the Complete Score to MISTER MOSES.
Album produced by James Fitzpatrick for Prometheus Records. Executive Producer: Luc Van de Ven. New Score & Orchestration Reconstructed by Nic Raine who also coducted the 75-piece City of Prague Philharmonic Orchestra. Sleeve Notes by Frank K. DeWald. The score is in the same style and colour as ZULU and BORN FREE with its use of symphonic orchestra and ethnic precussion.

Screening theatre no. 7 at Pinewood Studios has been renamed The John Barry Theatre in memory of John, who scored many films produced there. Gareth Hudson (Conductor), Mary Carewe and Peter Corry (Vocalists)
This programme will feature favourite songs and exiting incidental music from some 20 Bond films. Such crowd-pleasers will include Goldfinger, Thunderball, Skyfall, A View to a Kill, From Russia With Love, For Your Eyes Only, Live and Let Die, GoldenEye, Diamonds are Forever, License to Kill, On Her Majesty’s Secret Service and more...

The Halifax Light Opera Society will be presenting Billy at The Halifax Playhouse from 17th to 21st June. More... 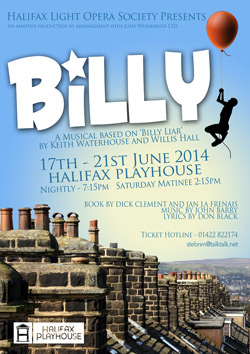 The Deep re-releases on CD 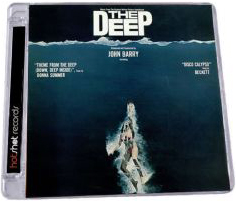 Hot Shot/Big Break Records are scheduled to release the John Barry/Donna Summer album, The Deep, on 10th February. Originally released in 1977, Barry & Summer received a Golden Globe nomination for their song, "Down, Deep Inside", which soared to no. 5 in the UK charts, winning a Silver Disc for sales volume.

Mastered from the original album tapes, the CD includes two bonus tracks, which could make it an essential purchase for Barry & Summer fans alike:

The White House Years - John Barry -- previously only available as the flip-side of Barry's instrumental single of "The Deep", released in the US.

Theme from The Deep (Down, Deep Inside) (12" Disco version) - Donna Summer.

The CD comes with a 16-page booklet which contains much of the original LP artwork and highly detailed notes by writer and music journalist Christian John Wilkane. He examines the history of Casablanca Records & Filmworks, the making of The Deep and the involvement of Barry & Summer in the project.