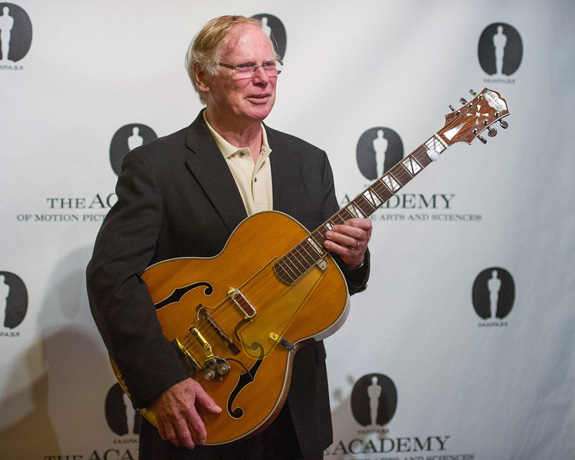 It was 60 years ago today when The John Barry Seven leader/guitarist Vic Flick arrived at CTS studios, Bayswater, London, for what on the face of it might have appeared to be just another routine recording session. By June 1962, Vic was combining his JB7 duties with a more lucrative sideline as a session guitarist. The increase in this work coincided neatly with a drop-off in work for the Seven, following John Barry's split from working with Adam Faith. In this particular working week, commencing Monday 18th, Vic had sessions booked on every day, with JB7 concert appearances at the weekend in Buxton & Bristol.

These sessions were at various London studios such as Phillips, Olympic, EMI, and the aforementioned CTS, and could be for one, two or three-hour sessions.  The Musicians Union agreed rates varied depending on the length of the session, the type of recording involved – record company or film company, for example – and occasionally if extras such as ‘porterage’ was involved, when a musician might have had some heavy equipment to lug around.

A standard three-hour session for a record company at that time brought in £7.50, but for the three-hour CTS film session, Vic’s diary appears to record £7.25, and he was requested to bring an electric and acoustic guitar.  There were strict union rules about the amount of music that could be recorded during a session, and typically this would not exceed four titles, and was often fewer.

This session was scheduled to run between 10 a.m. and 1 p.m., though it’s not known if the entire three hours was required for what was just one piece of music, albeit as it turned out, a very important piece!  For this was the first recording of The James Bond Theme, heard (in part) during the opening credits of Dr. No, and re-used liberally throughout the rest of the film, and thereafter forever associated with the fictional spy.

A month later, Vic was on the Columbia (EMI) recording at Abbey Road Studios, which resulted in a hit single credited to The John Barry Seven & Orchestra, which was essentially the same arrangement as the CTS original.  This three-hour session paid £6.90, an odd amount, meticulously logged by Vic.

For both sessions, Vic used an f-hole Clifford Essex acoustic guitar with a DeArmond pickup plugged into his faithful Fender Vibrolux amplifier. He had purchased the Clifford Essex from his fellow guitarist, Diz Disley, who was short of cash at the time.  "The guitar was played with a plectrum for that very hard, clacky tone, and fairly near the bridge, but not so near that the tone of the string died. I hit it very hard for an urgent, almost over-played sound."

However, two titles were recorded during this session and it’s highly likely the flutes only played on the other title – The Lolly Theme.

Barry saw The James Bond Theme as an amalgam of disparate styles – in-effect, jazz locking horns with rock 'n' roll. "It was very Dizzy Gillespie, a be-bop phrase. The bridge of the James Bond Theme – it's totally be-bop. It was this crazy mixture of stuff that filtered through one entity and came out like it did; and the funny thing was it all held together. It sounded like it all came out the same hole – you know, complete, but it was really a ragbag of ideas when you come to think of it."

Vic continued to combine session work with leading the JB7 until September 1963, when the pressure became too much. Realising something would have to go in order for him to retain his sanity, he chose session work full-time. He played on several more Bond scores throughout the remainder of the sixties.

Playing on the recordings of this famous film theme may not have made a fortune for Vic or for arranger/conductor John Barry, but its longevity and popularity is a fitting tribute to them both.