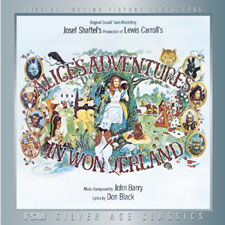 This premiere John Barry CD features two Warner Bros. albums from a period of great creativity for the composer: Alice's Adventures in Wonderland (1972) and Petulia (1968).

Barry characterized the soundtrack as having "almost a Gilbert & Sullivan style, but with a contemporary feeling," but fans will recognize no musical identity except for Barry's own. The score, as wonderfully recorded for the soundtrack LP, includes three ballads, large symphonic pieces, and enjoyable settings of classic Caroll nonsense -- with Barry melodies through and through.

Petulia was Barry's second collaboration with director Richard Lester (following The Knack...and How to Get It), a serious, contemporary drama set in San Francisco starring Julie Christie, George C. Scott and Richard Chamberlain. It is regarded as one of the best films of the era, with a sophisticated flashback structure (and cinematography by Nicolas Roeg) anchored by Barry's melancholy and melodic score.

In addition to the haunting main theme, Petulia features a distinctive figure for saxophones anticipating Diamonds Are Forever, and several pieces of vintage Barry source music -- low-key jazz tunes that rank with the best instrumental music of the era, and echo some of the source cues of the James Bond films.

This holiday present for Barry fans comes with new liner notes by Jon Burlingame, and is remastered from the original 1/4" stereo album tapes.

ALICE'S ADVENTURES IN WONDERLAND - A star-studded cast highlights this musical adaptation of the classic fantasy tales of Lewis Carroll. One day young Alice (Fiona Fullerton) takes a nasty spill down the rabbit-hole and finds herself in the bizarre kingdom of Wonderland, where she encounters a number of strange and enchanted characters, including the playful White Rabbit (Michael Crawford), the manic March Hare (Peter Sellers), the mysterious Caterpillar (Ralph Richardson), the Doormouse (Dudley Moore), the imperious Queen of Hearts (Flora Robson), and the quizzical Mad Hatter (Robert Helpmann). The cast also includes Spike Milligan, Peter Bull, Roy Kinnear, and Michael Jayston as Lewis Carroll. "Alice's Adventures In Wonderland" won two prizes at the 1973 British Academy of Film and Theatre Awards - for Georfrey Unsworth's photography and Anthony Mendelson's costume design. 1972 PETULIA - Petulia is Richard Lester's ode to the Swinging Sixties: a time of psychedelic instability when neither those who were square, nor those who were hip, really had it right. George C. Scott is Archie Bollen, a divorced San Francisco doctor in the midst of "discovering himself." Julie Christie is Petulia Danner, a peculiar young beauty recently married into an established family. Archie's sterile apartment and detached, bemused manner exemplify his inability to emote. Petulia's forward nature and desperate tenderness betray her fear of her sullen, abusive, pretty-boy husband (Richard Chamberlain). The physician and the newlywed embark on a schizophrenic love affair amid Pepsi references, automated motels, roller derbies, and a cameo by Big Brother and the Holding Company - but they never achieve the daring to truly change their lives. 1968.

More in this category: « King Kong on Channel 4 Lukas Kendall of Filmscoremonthly puts message in our forum »
back to top