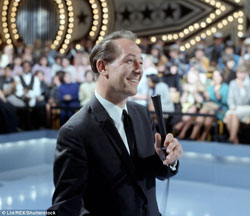 We were very saddened by the news that Brian Matthew, presenter of BBC Radio 2’s Sounds of the 60s & ABC TV’s Thank Your Lucky Stars, died on Saturday, April 8th, 2017.

Brian had only recently finished presenting Sounds of the 60s, after 27 years as host, and was looking forward to making a few programmes for the station in which he would reflect on his life and career in the music business.

Hs broadcasting career began in the early fifties and after a few years on the staff of BBC Radio, he became a freelance journalist and presenter, but still spent of his career working for the BBC. TV viewers got to know him through Thank Your Lucky Stars, which he presented from its second series in 1961 through to 1965, when Jim Dale took over for the final season.

He was associated with the pop world for much of his career, through BBC radio shows such as Saturday Club, Easy Beat & My Top Twelve. The John Barry Seven were regular guests on Saturday Club, and in 1960 were the resident band for a series of Easy Beat, before a Blackpool summer season with Adam faith forced their withdrawal.

Brian also presented the arts programme, Round Midnight, for many years, and in 1990 won the Broadcasting Press Guild Award for outstanding contribution to radio.

In the early nineties he interviewed a number of musicians for a series entitled Music Makers UK, including Lionel Bart, Tony Hatch, John Barry, Don Black Mike Batt & Leslie Bricusse. His interview with John Barry was particularly well-received; his gentle, easy-going yet still probing style successfully extracting all the important stories behind the key moments from the usually interview-shy composer’s equally lengthy career in the business.

2008 brought Brian further deserved recognition when he won a Sony Gold Award "to celebrate an impressive record of more than 50 years of national and international radio broadcasting."

He will be sorely missed by his family, friends and fans.